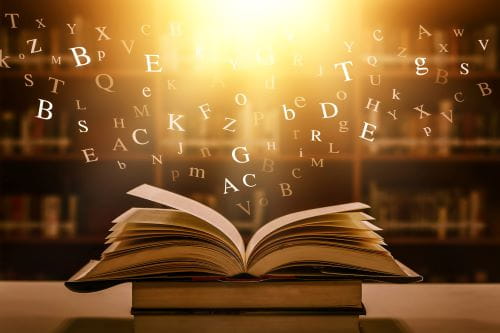 If you’ve forgotten the names of clouds you’ve lost your way.

Among my fondest childhood memories are those of time spent in my grandmother's garden, resplendent with vegetables, fruits, and flowers. I picked pole beans and pulled carrots, but it was the flowers that enchanted me, and I wanted to know the names of each one—the dahlia and the delphinium, the hydrangea and the hollyhock. I loved the words almost as much as the flowers, repeating them until they were as integral to my lexicon as the flowers they named were to my garden sensorium.

I was fortunate to have spent some of my formative years as a free range child exploring the countryside, identifying acorns and buttercups, ravens and wrens. Not so fortunate, many children today have neither the opportunity nor the freedom to walk through pastures of clover nor explore among the bluebells, ferns, and moss of a woodland. Sadder still, a child today would be unable to find these nine common words in the Oxford Junior Dictionary (OJD). In 2007, this dictionary removed approximately fifty words describing aspects of the natural world, replacing them with analogue, attachment, blog, broadband, celebrity, creep, cut and paste, negotiate, vandalism, and other words that “ensure the dictionary remains relevant and beneficial.”

Should this be a matter of concern for teachers and parents, or is it simply a dictionary doing its job of keeping up with the evolving language of culture? This article explores both sides of this educationally relevant question.

The Role of the Dictionary

When we refer to the dictionary, many of us may have in mind a fictional idea—a singular authority of the English language; but “the dictionary” has become both “a symbol of the idea of proper English'' and a catalog of a language that evolves with the culture it represents. And while a dictionary's purpose may seem obvious, there is much debate over whether its role should be descriptivist—describing how the language is being used with no value judgment of that usage, or prescriptivist—informing readers of correct usage. The values associated with these roles have competed for currency since the first dictionaries appeared in England some 400 years ago. The stories of their development, the lexicographers behind them, their cultural significance, and their historical importance for improving one's standing in society make fascinating reading. Also of interest is this opinion piece detailing the sometimes passionate dissent aimed at the “permissiveness” of some descriptivist dictionaries that “reinforce the notion that good English is whatever is popular.” Readers are also referred to The Professor and the Madman, the true and incredible story behind the making of the Oxford English Dictionary.

Like all languages, English evolves, and while descriptivist dictionaries are less contested and widely accepted today, it turns out that in choosing a dictionary we knowingly or unknowingly take sides in a long-standing dispute. Such is the case with the protest and defense over the removal of the fifty-or-so words related to nature (hereafter referred to as “nature words”) from the OJD. (It should be noted that the OJD also deleted words associated with Christianity and British history in the same editorial process, also a subject of debate.)

Reaction to the Exclusions

At the heart of the argument against the removal of the nature words is the estrangement that now exists between many children and the natural world. Opponents have made the following points:

In addition to a letter to the editors of the OJD from twenty-eight renowned writers, more than 200,000 people signed a petition calling for the Oxford University Press (OUP) to reinstate the nature words. While the petitioners recognize the need to make room for introducing new words, they comment that:

... it is worrying that in contrast to those taken out, many [of the replacement words] are associated with the interior, solitary childhoods of today. In light of what is known about the benefits of natural play and connection to nature; and the dangers of their lack, we think the choice of words to be omitted shocking and poorly considered.

The petitioners continue that it is the role of the dictionary to “address these issues and … help shape children’s understanding of the world, not just to mirror its trends,” and that restoring the words would send an important “cultural signal and message of support for natural childhood.”

The OUP defends the removal of the nature words (as well as other omissions) based on its practice of “analy[zing] language children are using” while also ensuring that the dictionary reflects “the words children are encouraged to use in the classroom.”

Additionally, the OUP states that:

To clarify, the words in question have been removed from the print-version of the OJD only. Because printed dictionaries have space limitations, words have to be removed as new words are added (unless, as some have argued, the OJD were to create a two-volume set). Dictionary editors consider the following when it comes to including or excluding words:

The bottom-line argument is that because it only has space for ten-thousand words, the OJD “is a sampler for developing minds, not a comprehensive catalogue of the language.” And yet for some there is a sense of loss, or at least nostalgia, for a time when heather and herons were more descriptive of a child’s reality than analogue and attachment.

In response to the removal of the set of nature words, Robert Macfarlane and Jackie Morris created The Lost Words: A Spell Book (2017) “that seeks to conjure back the near-lost magic and strangeness of the nature that surrounds us.” In addition to winning several book awards and being shortlisted for others, the book has “taken on a 'wild life' of its own with the sparks of inspiration taking it in numerous creative directions,” such as:

The broader protest over the removal of the nature words inspired by The Lost Words reflects a belief in the power and significance of words. And while the nature words in question have not been removed from the language, and can be found in other versions of the Oxford Dictionary (including online versions), the authors of the petition point out that the words' omission from a dictionary meant for seven- and eight-year-olds is a symptom of a larger cultural problem—the “interior, solitary childhoods” that is at the root of many physical and emotional childhood ailments today.

In a commentary on The Lost Words, several studies are cited in which researchers attempted to “quantify children's knowledge of nature.” In one Cambridge study, “Children aged eight and over were 'substantially better' at identifying Pokémon 'species' than 'organisms such as oak trees or badgers.'” The researchers concluded that, “Young children clearly have tremendous capacity for learning about creatures (whether natural or manmade),” but appear to be “more inspired by synthetic subjects” than by “living creatures.” Indeed, a subsequent study demonstrated that “only a third of eight- to 11-year-olds could identify a magpie, though nine out of 10 could name a Dalek.”

This disconnect is at the heart of our loss of literacy of nature, as described by anthropologist Beth Povinelli, and is directly correlated with the loss of natural spaces and broad stroke structural changes to culture and society (a topic beyond the scope of this article). As the authors of the Pokémon study conclude, we need “to re-establish children’s links with nature if we are to win over the hearts and minds of the next generation,” for “we love what we know … What is the extinction of the condor to a child who has never seen a wren?”

In a review of The Lost Words, the head of children's dictionaries at OUD is quoted as stating:

When you look back at older versions of dictionaries, there were lots of examples of flowers for instance. That was because many children lived in semi-rural environments and saw the seasons. Nowadays, the environment has changed.

There is a harsh truth in this statement, whether we are referring to environs in the U.K., the U.S., or elsewhere, and herein lies the crux of the issue. A shrinking natural world combined with increased technology-use by children has resulted, to varying degrees, in children's estrangement from the natural world; in many instances, words and pictures are all they know of willows and weasels, ferrets and ferns.

Words help us imagine what we may never actually see. In one review, we learn about the philosopher A.J. Ayer, who “introduced a generation to the notion that unless we have a word for something, we are unable to conceive of it, and that there is a direct relationship between our imagination, our ability to have ideas about things, and our vocabulary.”

Ayer's words ring loud and clear in the Montessori classroom. The Great Lessons are told in the oral tradition, as stories using powerful words, to help the child imagine what they cannot see—the origin of the universe, the early Earth, the beginning of life, the development of culture. While a range of charts, experiments, and other materials accompany the lessons, the stories set the stage for ideas that inspire and set the child on a path of investigation and discovery.

In other lessons, those words that name something play a central role in the first part of the three-period lesson, when the teacher names an object, organism, or part; for example: “This is an ovoid.” “This is an echinoderm.” “This is the petiole.” Elementary children are also given the etymology of new vocabulary: ovoid derives from the Latin ovum, for “egg”; echinoderm comes from the ancient Greek for “spiny skin”; and petiole comes from the Latin petiolus, for “little foot.”

These Latin- and Greek-based names provide meaningful descriptions that not only help children “see” the characteristics of the organism or object so named, but are themselves memorable descriptors. As Robin Wall Kimmerer writes in Gathering Moss, “With words at your disposal, you can see more clearly. Finding the words is another step in learning to see.” Put differently, “naming elevates a thing into something that is worth knowing … something worth caring about.”

Defenders of the revision to the OJD point out that “if a kid really wants to know what 'acorn' means, she can still look it up. Online.” But this is sometimes problematic. Depending on the search engine one uses, “buttercup” comes up as a pop song or a Powerpuff character before it comes up as a flower; and a search for “conker” brings up a squirrel in a video game more often than the horse chestnut it names. Given widespread technology-use among children, the argument may come down to one commentator's belief that “We nowadays live in a world where children are more likely to be familiar with creeps and celebrities than larks or leopards and they are horribly impoverished as a result.” It is certain that many teachers or parents would see this as concerning, if not alarming.

Montessori education has always recognized the importance of children's knowledge of and participation in the natural world. Entire themes, units, and community service projects are centered around topics from botany, zoology, and ecology. Teachers are trained to encourage children to observe, ask questions about, and investigate the natural world. Helping children expand their lexicon of words that describe the natural world—through biology studies, reading, poetry, art, and more—complements many important elements of the Montessori curriculum and philosophy. And while magpies and mistletoe exist without the words that name them, the words themselves matter. My grandmother's garden instilled in me wonder, appreciation, and a sense of stewardship of the natural world. The flowers were enchanting, but learning names like peony and petunia elevated the connection to include the words that describe that world.