Updating the Montessori Biology Curriculum: Part Two—The Tree of Life: Revising our Lessons on the Classification of Life 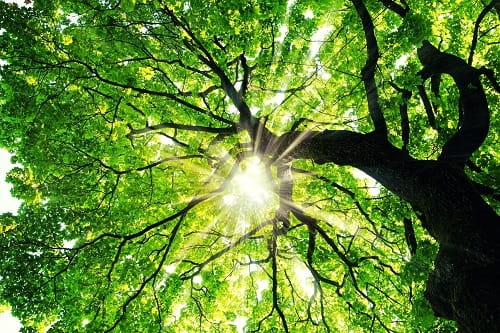 In Part One of this series, we addressed the dynamic nature of the field of biology, specifically the changes in approaches to classifying life on Earth. We outlined the history of classification from the two-kingdom approach to the three-domain system. An informal search revealed the prevailing use of the five- and six-kingdom approaches to teaching about life in Montessori Elementary classrooms, despite their obsolete status. This may be due, in part, to teachers lacking the time and resources to stay current with biology updates from the field and the challenges involved in updating a major aspect of the curriculum.

With the aim of offering support to teachers in this area, Part Two of this series provides information on:

The three-domain system for classifying life on Earth was proposed in 1990 by Carl Woese, and is the approach most widely accepted by biologists today. A domain is the highest rank (above kingdom) in the classification of living things. Domains represent the first branches of all life, and all living things belong to one of these three groups: 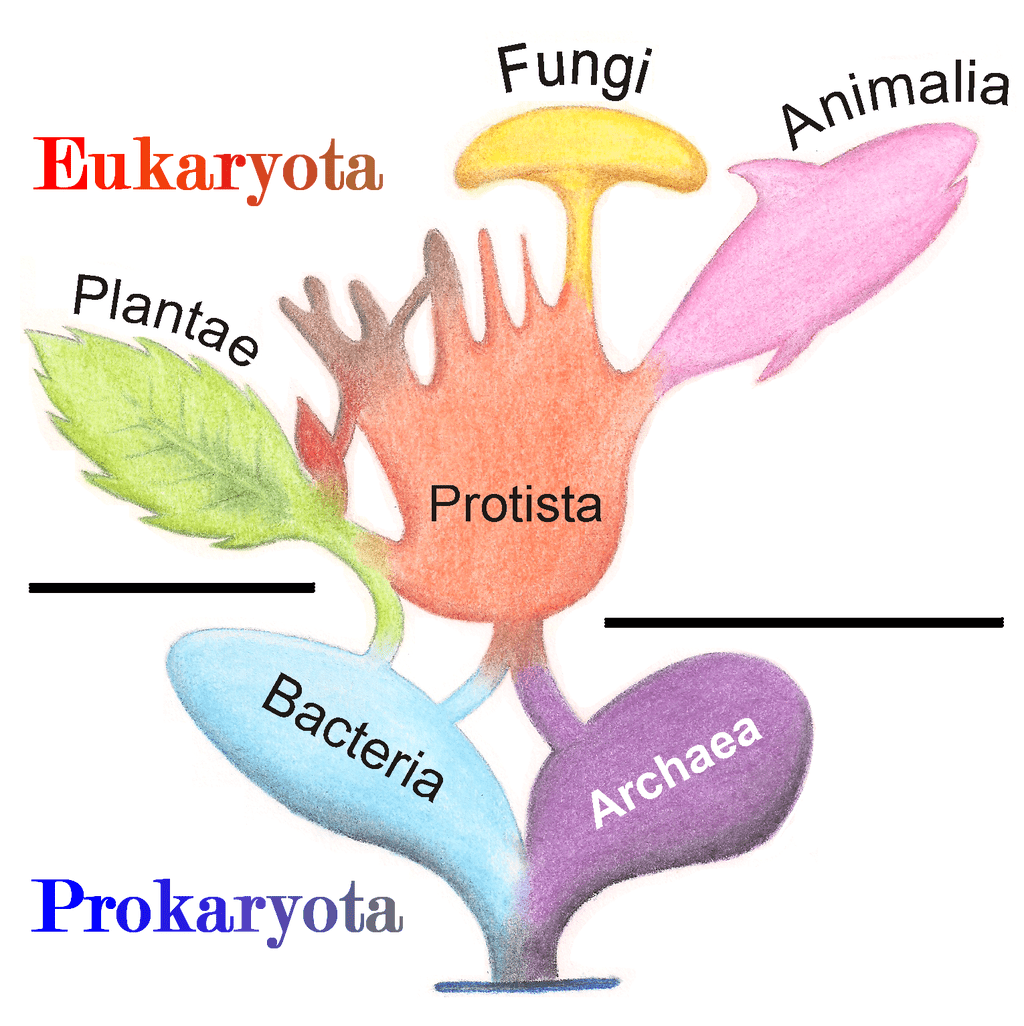 To review, bacteria and archaea were once grouped together, first as Kingdom Monera, then as Kingdom Prokaryotae. Later, due to the discovery of their considerable differences at the cellular level, they were recategorized, first into two kingdoms, then into two domains. Priscilla Spears (2016, 29) explains:

The reason for dropping the "kingdom" label is that all these organisms are probably not descendants of a common ancestor. The Bacteria and Archaea arose so long ago that no one can say for sure if they share a common ancestor. These two branches of life share the basic prokaryotic cell structure, but at the molecular level, they are dramatically different inside.

Both types of organisms are made of prokaryotic cells—their genetic material (DNA) is not contained in a nuclear membrane, but is loosely spread throughout the cell—they contain a nucleoid rather than a “true” nucleus. Prokaryote literally means “before the nucleus.” Prokaryotic organisms—bacteria and archaea—are single-celled. This is where their similarities end. In fact, bacteria and archaea have less in common with each other than do elephants and palm trees! (Spears, 2016).

Elementary-age children do not ordinarily study the molecular and biochemical differences between bacteria and archaea, but they can be introduced to the names Domain Bacteria and Domain Archaea since they will encounter these in their future biology studies. (Children may encounter the term Monera in older resources and should know that this term is no longer used by biologists; neither are the terms eubacteria and archaeabacteria, but all of these can be discussed in the context of the history of classification.)

Elementary-age children generally enjoy learning about the fascinating aspects of the prokaryotes. They already know that some bacteria are “germs,” but they also need to know about the many types of “good” bacteria that are used for things like processing food—cheese, yogurt, chocolate, and pickles, for example. Other types are used in the manufacture of laundry products, antibiotic ointment, to purify water, and in the synthesis of certain vitamins. Far beyond human uses, bacteria support life in all ecosystems. Without bacteria and archaea, in fact, “both the quantity and quality of life would be reduced drastically.”

Many of the archaea are extremophiles (“lovers of extremes”) and can be found in very hot places like underwater lava vents; very salty places like briny water; and places of high methane concentration, like the rumen of cows. Anyone who has worked with Elementary-age children knows that anything extreme is very likely to pique their interest. (Teachers can find detailed information, stories for lessons, and ideas for hands-on exploration of the prokaryotes in Kingdoms of Life Connected: A Teacher's Guide to the Tree of Life, by Priscilla Spears.)

Every organism that is neither a bacterium nor an archaeon belongs to Domain Eukarya. This group includes the protists, fungi, animals, and plants. Organisms in this domain are made of eukaryotic cells; this means their genetic material (DNA) is bound in a nuclear membrane. Eukaryotic cells have a “true nucleus” (from Greek: eu = “true”, karyon = “nucleus”). Some eukaryotes are single-celled, and some are multicellular.

Like the prokaryotes, the protists were once considered a kingdom. This is no longer the case, however, given current trends in biology that redefine a kingdom as a group holding all the descendants of a common ancestor. We will see on the Tree of Life that some of the protist branches continue to lineages in the fungus, animal, and plant kingdoms. Put differently, some protist ancestors have descendants in the Fungi Kingdom, some in the Animal Kingdom, and some in the Plant Kingdom. In fact, some protists are more closely related to organisms in these three kingdoms than they are to other protists. For example, a green alga is more closely related to land plants than it is to an amoeba, another protist.

According to current biological thinking, fungi, animals, and plants constitute the only valid kingdoms. In each case, all the organisms within that group are descended from a common ancestor, and the group holds all the descendants of that ancestor. This will become clearer as we look at the Tree of Life in a later section.

As the reader can appreciate, this part of the curriculum—scientific classification in general—may be challenging to comprehend. How, then, do we help children understand domains and kingdoms? For younger children, the teacher may wish to use a three-kingdom approach (fungi, plant, and animal) and address the prokaryotes and protists as two other groups of organisms we study. More precise distinctions and definitions, including the difference between domains and kingdoms, can be taught as children gain understanding.

We introduced phylogenetics in Part One of this series as a way to group organisms based on common ancestry, determined by genetic studies at the molecular level. This approach looks at an organism's evolutionary history, its connection to recent and distant ancestors, and how it has changed through time. This is in contrast to the Linnaean classification system which groups organisms largely by morphology—external and internal structures. The traditional Montessori charts reflecting Linnaean ranks, and even the five- and six-kingdom charts, do not show evolutionary relationships; rather, they are both “here and now” schemes that exclude the history of life. Biologists today use branching diagrams to display the diversity and history of life. While the most formal versions of such diagrams are often difficult to read, children can and should learn to read the Tree of Life versions now available for Elementary classrooms, where they can easily see the lineages of life and how they are related. The material below was created by Priscilla Spears and is available as a free download from Big Picture Science: 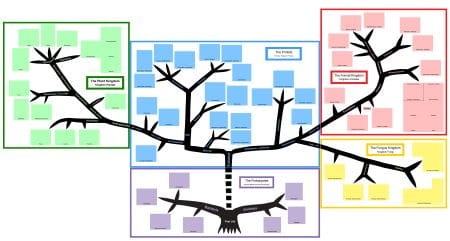 The Tree of Life

On the diagram above, “branches show which groups share a recent common ancestor, and therefore are closely related. The extant (currently living) species are placed at the end of the branches … life at the branch tips is still changing and … the branches themselves show the history of life” (Spears 2016, 9). Let's see how this works:

Let's look at an extended example on the Plant Kingdom section of the Tree of Life. Note that children will learn these concepts over time—weeks or months—and not at one sitting, as outlined below. 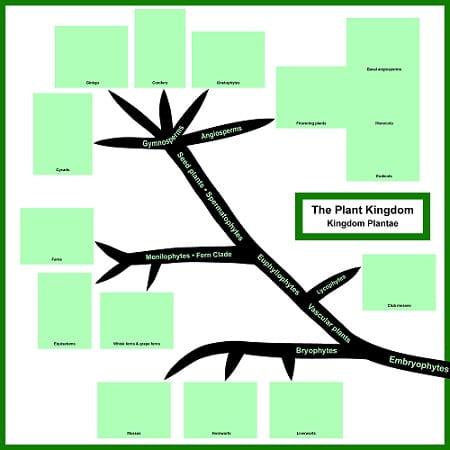 The first main branch of the Plant Kingdom is labeled Embryophytes; this is just another name for land plants and distinguishes organisms in this kingdom from their ancestor, a green alga. The Tree of Life composite image shows green algae, in the protist group, as the most recent common ancestor of land plants. Embryophytes developed traits to help them adapt to life outside the water. Following the main branch, we see that each new lineage develops as the result of derived traits that gave it a new way of surviving on land:

This expanded example illustrates only a small amount of information children will encounter through lessons on the Tree of Life. (A sample lesson on the concepts presented above, as part of a larger Tree of Life study, can be viewed here.) The Tree of Life approach makes up-to-date evolutionary concepts accessible to children, and lessons can be simplified or expanded depending on students' readiness and level of understanding.

We recommend the following teacher resources for understanding phylogenetics as a system for classification, reading branching diagrams, teaching about the Tree of Life, and other related ideas:

A Final Word about the Words

Sometimes teachers question whether the biological names for groups of organisms are too advanced for Elementary age children. Remember that one of the defining characteristics of children in the second plane of development is their aptitude for vocabulary acquisition, the meaning and origin of words, and language syntax. The second-plane child is very competent in learning new words, and most truly enjoy it.

The Montessori curriculum includes the etymology for Latin- and Greek-based vocabulary, especially as it relates to biology, and etymologies should be presented within lessons, where they provide meaningful descriptions that not only help children imagine the characteristics of the organisms so named, but are themselves memorable descriptors. Euphyllophytes are “true leaf plants.” Echinoderms have “spiny skin.” Just as Elementary children like to learn about extremes, many find words like gastropod (“stomach foot”) amusing, helping them to see the snail through a new lens and encouraging further study.

When Norton Juster wrote the children's classic, The Phantom Tollbooth, the critics said the vocabulary was too hard for children. To that, Juster replied, “There is no such thing as a difficult word. There are only words you don't know yet.”

Join us for Part Three of this series, where we will explore how to incorporate the important but often overlooked topic of adaptations into our Tree of Life and classic Montessori life science lessons (and where we are sure to encounter more new vocabulary as well)!