The parent looked at me with worry. “Is that safe?” she asked, gesturing at our school’s new playground. I turned to look at the source of her concern. The playground is made of natural materials, such as downed trees that act as balance beams. A 3-story tree house offers an aerial perspective of our 5-acre campus. A tunnel, covered by large, natural river boulders, is hard to climb over, but it can be done.

Since the playground’s opening, we’ve had no injuries. Children use it in new and unexpected ways every day, and enjoy play while gaining life experience.

Elsewhere, though, playgrounds are getting “safer.” Swing sets are being re- moved, and straight slides replaced with curved ones that slow children down. The term “helicopter parent” has entered our vocabulary.

We adults probably remember playing in the vacant lot until sundown, walking through the woods with neighborhood kids, and taking a stroll to the corner store unaccompanied. A lot of people say, “Those were the days… but it’s a lot different now.” And it is different. Today, children have learning challenges, emotional issues, and heightened sensory awareness. Decades ago, it was rare to hear about these issues. But there is evidence to show that protecting children as we do today may be detrimental. In one study, rats were prohibited from playing freely during “a critical phase in their development.” The result was that the protect- ed rats learned to react to new situations with fear and aggression, and “failed to adapt and explore surroundings” (Gray, 2014).

The same article notes that over the last 60 years there’s been a “continuous, gradual but dramatic increase in childhood mental disorders, especially emotional disorders.” Experts suggest that this may be a result of a gradual increase in prohibited and protected play.

In the Internet age, the continuous need to be plugged into the media also fuels parents’ fears. “If there was a kidnapping or case of child abuse or child murder in one part of the country, those at a distance would never hear about it. But in our Internet-fueled world, we hear about threats daily, however distant they are…. It’s not surprising that many parents are terrified for their children’s safety” (Taylor, 2015).

But allowing our children to engage in so-called “risky play” has its benefits. Children climb trees to “scary heights” to get a bird’s eye view of the world…and they get a thrill out of it. They ride skateboards at high speeds, swing too high, and whiz down slides just fast enough to “produce the thrill of almost, but not quite, losing control” (Gray, 2014). They discover limits and push boundaries. Their self-esteem soars when they learn to do things themselves, on their own terms.

It may not be easy to let your child walk home from school alone, or climb a tree all by herself. It’s scary— for you. But you will feel an absolute moment of relief when you see her come around the corner or slide safely down the trunk. And you will know that she just had a little adventure, and adventures are exciting precisely because they’re a little bit scary.

JENNIFER WHEELHOUSE is a mother of two and head of school at Montessori Children’s House in Redmond, WA, an AMS-accredited school that has been in operation for nearly 30 years. Contact her at jennifer@mchkids.com. 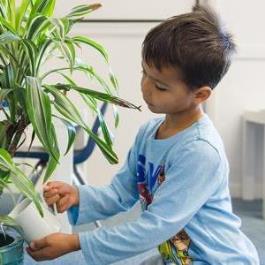 The Importance of a Simple Environment