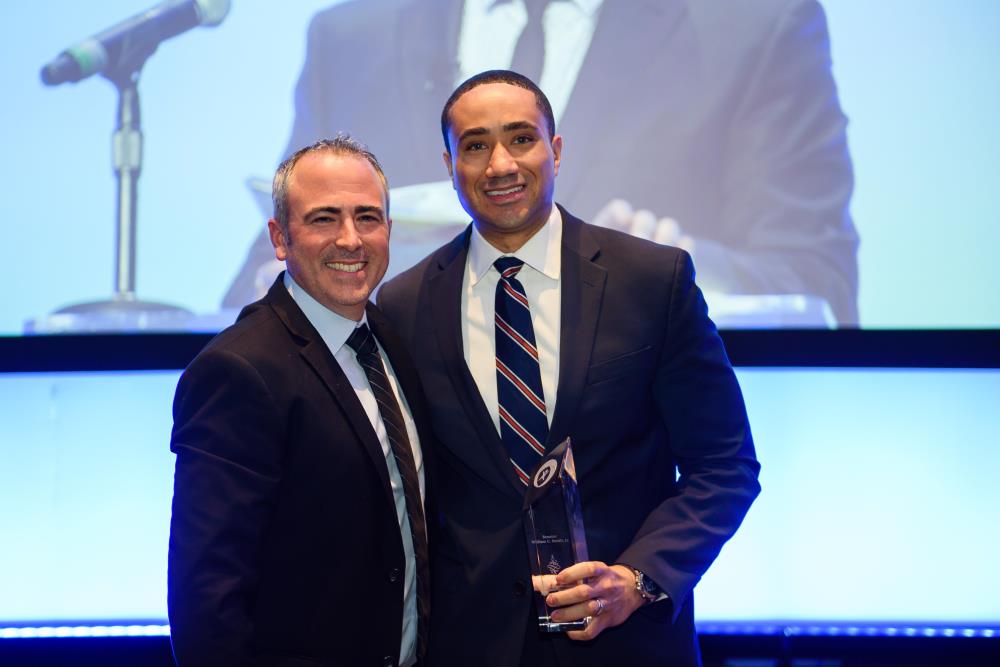 “I'm a Montessori lifer, Pre-K and all the way through. I attribute everything I've accomplished to Montessori,” Maryland Senator William C. Smith Jr. said at an awards ceremony that took place during Community Night at The Montessori Event this past weekend. Senator Smith (at right in photo) was bestowed AMS’s Dr. Maria Montessori Ambassador Award, which honors individuals who, through their work in a variety of areas, are fostering a landscape in which Montessori education can flourish.

Making one of his last public appearances before being deployed to Afghanistan as part of Operation Resolute Support on March 29, Senator Smith told the crowd, “Maybe if we had more folks involved in Montessori we wouldn't find ourselves in these conflicts.”

A dedicated public servant and champion of Montessori education, Senator Smith is currently working to advance a bill that would allow qualified individuals to become eligible for teacher certification in Maryland Montessori schools. The Senator has reaped the benefits of Montessori firsthand, having attended the AMS-accredited Barrie School in his hometown of Silver Spring, Maryland.

“It is our honor to bestow this award on Senator Smith for his efforts to advance Montessori education in the state of Maryland,” said Dr. Timothy Purnell (photo, left), chief executive office of the American Montessori Society. “We thank him for being a passionate champion of Montessori. Through his devotion to social justice and advocacy, he exemplifies the core principles of Montessori education.”

Senator Smith served in the Maryland House of Delegates before being appointed to represent District 20 in the Maryland Senate in 2016, where he presides as chair of the Senate Veteran’s Caucus and is a member of the Judicial Proceedings Committee. He is a civil rights attorney, an intelligence officer, and member of the U.S. Navy Reserve.