Extending the Promise of Montessori Education to Financially Disadvantaged Families 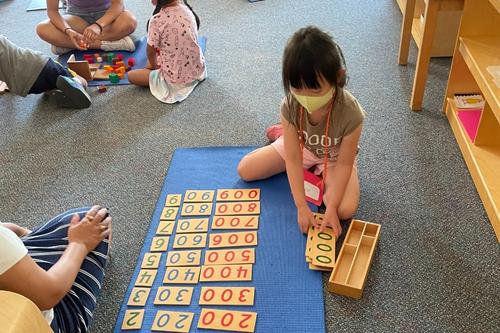 Research has demonstrated that a Montessori education can offer children a range of benefits including enhanced executive function and social cognition [Lillard-Quest 2006]. Seeking a way to offer Montessori’s benefits to children from lower income families, Lexington Montessori in Lexington, MA has been a school on a mission: offering a six-week, tuition-free academic, social, and recreational enrichment opportunity to a growing cohort of children throughout their school years through a summer program called Horizons at LMS.

Horizons at LMS is an affiliate of Horizons National which, since 1995, has sponsored “academic and enrichment programs serving children from under-resourced communities on the campuses of independent and charter schools, colleges, and universities across the country.”[2] Horizons at LMS operates as a non-profit entity with its own board of directors, that is entrusted to raise funds for the program and to support the work of the executive director.

The genesis of the Lexington Horizons program can be traced to an article in Independent School Magazine that Aline Gery, LMS head of school read which described the Horizons National program as a way to cultivate a public-private partnership in a school community. It inspired her to invite a group of interested teachers and administrators to gauge the enthusiasm for developing a Summer Program as an initiative in line with the school's mission of inclusion and social engagement.

Gery notes that on average, 27 – 30% of the children who attend LMS receive tuition assistance, and that aid accounts for 20% of the school’s tuition revenue. Sponsoring a tuition-free, needs-based summer program represented a way to make Montessori education accessible to more children, independent of family income. This goal ultimately motivated the staff and administration and the LMS Board of Directors to pursue affiliation with Horizons. “We all expressed interest in the Montessori approach for all kids and shared a desire to reach out to families nearby who could not afford LMS.”

The next step for LMS was to meet with Horizons administrators and have them tour the school. It emerged in discussion that Montessori practices, such as age groupings and the use of Montessori pedagogy, were distinctly different from those in other Horizons affiliates. As Gery explains, “There were two things that caused Horizons to pause:

After some back and forth, we determined that in the first three summers of the program at LMS, we would enroll three-year-olds AND rising first graders. In this way, we started a 3 – 6 classroom and a Lower Elementary classroom at the same time.”

Each year since 2015, the program has added new students and has retained the majority of those previously enrolled. As students advanced, an Upper Elementary class was added. A middle school classroom is scheduled to open in summer of 2022.

Though academics are a central focus of all Horizons programs, so are educational and recreational field trips, swimming lessons for older children, and water play for younger students. High quality, nutritious food is offered for breakfast and lunch. At LMS, students help garden and collect harvests from the school’s extensive gardening program and, as often as possible, experience lessons and learning activities outside. LMS recently acquired 19 acres of adjacent land on which students walk paths and observe nature. For the 2020 – 2021 school year, the school built outdoor learning spaces—a series of canopies supported by posts and outfitted with pallets and storage boxes. These served to foster children’s awareness of the natural world, and maximize outdoor learning during the COVID pandemic.

Horizons at LMS program director Maria-Veronica Barnes notes that one of the most transformative aspects of the program is the social-emotional environment that encourages both self-discovery and community trust. She attributes this not only to Montessori philosophy but to the relationships that develop and deepen when children get to know each other and their teachers from year to year. “When they are here they can be who they are. It seems to me that they're relaxed. I see a lot of joy and kids who are care-free. And more than ever this year, it seemed easy for them to engage in meaningful work and classroom routines quickly because there is a sense of continuity and sameness that they recognize as theirs and embrace. They were able to pick up where they left off because they know they belong here."

Upper Elementary student Ashley Ovalle described her sense that Horizons provided a bridge between the year students spent doing distance learning at home and the new school year that lay ahead of them. “As a student, [the Horizons at LMS program] helps me because I have people to support me. During the school year we didn’t always have time to look back on things we learned online, but this summer we reviewed things so I could remember and understand them better for next year,” she said.

She also notes how she and her classmates experienced the traditional benefits of a Montessori multi-age classroom. “Now that I’m older, I can help my friends with things I’ve done before.”

When asked to cite favorite works and activities, she named some that would be familiar to Montessori Upper Elementary students everywhere, such work with fractions, perimeter, and the area of a circle, a trapezoid, and a parallelogram. But she also appreciated activities that led to students better understanding the world and themselves, such as a literature circle study of the middle grade novel Harbor Me by Jacqueline Woodson in which six young people discuss their lives and their family’s concerns, that reflect contemporary issues such as incarceration, economic uncertainty, and racial conflict. She said that her favorite project that she worked on this summer was her identity flag, a flag design with symbols representing different aspects of her life and her interests. She summed up the challenge and the satisfactions of the project by describing both: “We had to show parts of ourselves, and it was hard to introduce parts of ourselves to other people, but it was also fun to get to express ourselves.”

In order to gather data to demonstrate the effectiveness of the program, at the beginning and end of the six weeks, students take standardized assessments, as required by Horizons National. Maria-Veronica Barnes noted the seriousness and sense of purpose that students showed about their work. Though an abbreviated summer vacation awaited them, they were committed and focused on finishing strong. “Even though the students were in their next to last day of school they were invested in finishing work that their teachers had assigned or they felt needed to be done as opposed to filling an assessment. They were asking, "How long is this going to take? We have work to complete!" These children get a sense of accomplishment in the process of work itself, rather than in the score they may obtain in a test. Which is in itself different than what they experience in their schools,” Barnes remarked.

Looking Ahead, Connecting to Montessori’s Past

In considering what has been accomplished so far by Horizons at LMS, Barnes appreciates that the program is established and has benefitted from the experience of seven years of incremental and successful growth. “Now we have experience that gives us more certainty about what we need to be successful. We’re more confident now that what we are doing in the summer works for kids who do not practice Montessori methods during the school year. We’re doing something that we think is needed, and there’s a real benefit for us as a school in that we are living our values. What we would love for the next step is for other Montessori schools to embrace this model.”

The viability of Montessori education for all students, especially those with families facing economic challenges, has been demonstrated historically from its very beginnings. It was in San Lorenzo, an under-resourced neighborhood in Rome, that Maria Montessori’s first students showed promise and achievement in spite of a lack of previous schooling, and sub-optimal economic conditions for their families. In this sense, Horizons at LMS is a contemporary response to some of the same conditions that inspired Montessori education itself more than 100 years ago. And it is in keeping with Montessori’s lifelong commitment to fostering a more peaceful and just world[3] that Montessorians take initiative to extend the access of her educational methods to an ever-growing population of children from all walks of life.