Revisiting the Pink Tower: A Pillar of Pedagogical Ingenuity 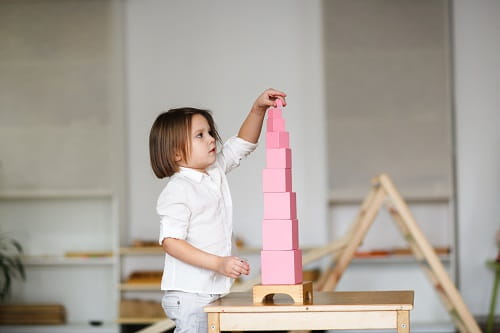 To anyone not familiar with Montessori education, the Pink Tower might appear to be a simple block-stacking activity. An iconic Montessori material that is ubiquitous in Montessori Early Childhood (EC) classrooms, featured on school websites, and even integrated into the logo of some Montessori materials companies, the Pink Tower has been regarded as a visual symbol of Montessori education. This ingeniously designed pedagogical material embodies principles of mathematics and geometry that the child will first experience on a sensorial level, and later think about abstractly.

In photographs of children working with the Pink Tower, we often see a child as young as three years old, sometimes not much taller than the tower itself, very gingerly and with great concentration placing the smallest cube, only one cubic centimeter, atop the tower as the crowning achievement of their work. What is not seen are the inherent pedagogical properties incorporated into the design of the material and how these contribute to the child's physical and academic development. These features are the focus of this article.

Physical and Pedagogical Properties of the Pink Tower

Most often made of wood, each cube in any one set is identically constructed, each face of each cube the same texture and painted pink. The only difference from one cube to any other is its size, which isolates the difficulty for the child. Isolation of difficulty allows the child to focus on and gain mastery of one aspect of the material. In a typical set of blocks, for example, the blocks are usually different colors; the Pink Tower, as its name suggests, contains only pink cubes. In this way, the child works on visual discrimination of the varying sizes without attending to the distraction that different colors might present. It is noteworthy that the color pink was not an arbitrary choice. Maria Montessori is said to have experimented with different colors, pink being chosen most frequently by the children with whom she was working.

The Pink Tower is in the Sensorial area of the EC classroom. When children work with this material, they practice and refine several skills: hand-eye coordination, fine-motor movements, and visual discrimination of dimensionality—differences in each cube's length, width, and height. Haptic perception is also engaged as the child moves each cube, one at a time, to their work mat. Beginning with the smallest cube, each one is progressively heavier. The sequence is reversed when the child begins with the largest, and heaviest, cube in the construction of the tower, with each successively smaller cube becoming lighter. In placing one smaller, lighter cube atop another, the child must also rely on vision, thereby practicing hand-eye coordination. Up to age six, “Vision appears to guide the development of manual manipulation and helps to bring meaning to the haptic information being retrieved by the hands” (Cermak 2006). Older children can be invited to build the tower while blindfolded.

In the child's manipulation of the material, they perceive the weight difference between one cube and the next while carrying each cube, one at a time, from its stand to the work rug. The child is typically shown how to hold the cubes with one hand on top, and one hand underneath. An interesting question is whether Montessori was aware of the work of Ernst Heinrich Weber, who, more than 150 years ago, “observed that the ability to discriminate weight is better when the weights are actively lifted by the hand than when they are supported by a passive hand,” suggesting that the effort “associated with voluntary muscular exertion, contributes to the perception of weight” (Flanagan & Johansson 2002).

Working with the Pink Tower

With slight variations depending on the source, the basic steps of the presentation and child's work are as follows:

There are many extensions to the basic exercise of building the tower; for example, laying the cubes out in linear or spiral fashion on the rug; comparing the dimensions of the cubes with other materials in the classroom; and discovering relationships between the Pink Tower, Brown Stair, and Red Rods, then combining these materials to create new structures and arrangements. There is a wide range of opinions among Montessorians, however, about whether this is an appropriate use of the materials.

An interesting empirical question is whether the child's work and extended experience with the Pink Tower would facilitate perspective taking under experimental conditions, such as Piaget's mountain task. Of note is one study (Borke 1975) suggesting that the tasks used during Piaget's original experiment may not have been within the subjects' response capabilities; and another (Hughes 1975) in which the apparatus was changed and a primer added. In both studies, children were able to understand and articulate another person's perspective (theory of mind) earlier than Piaget concluded.

Before looking into how the Pink Tower helps prepare the child for future lessons and studies, an examination of what is meant by indirect preparation is in order. Montessori wrote in The Absorbent Mind that “Children feel a special interest for those things already rendered familiar to them (by absorption) in the earlier period. On these they can focus their minds with great ease [emphasis added]” (in Haines 2011). We can say, then, that familiarity with a material the child worked on in their younger years could play a role in their interest in, and perhaps even affinity for, the same or similar material used later for instruction in more advanced or new ideas. Put differently, a positive memory of earlier work with a material could engender a positive attitude toward a future lesson with the same or similar material. Montessori refers to the materials that bring this about as “old friends.” In and of itself, this is a useful and important association. Admittedly, however, it is difficult to match, in contemporary neurocognitive terms, Montessori's impressionistic language (absorbent mind) to nitty-gritty brain development. The very term indirect preparation might need to be fully explicated, empirically, as suggested in the previous comment on Piaget's mountain task.

Looking at an example, working with the Pink Tower helps develop skills necessary for tasks involving fine-motor movements. Building the tower involves carefully controlled movements akin to those used in writing, for example, as the child uses the tripod grip to carry the smaller cubes. Descriptors such as small, smaller, smallest, big, bigger, biggest are also inherent in the material, lending the Pink Tower to lessons in vocabulary, writing, and reading as the child makes labels for the cubes and other classroom materials.

Another association can be made between the Pink Tower and the beaded materials for squaring and cubing in the Elementary classroom. Through manipulation of the beaded materials, the child sees that a five-square is made of five five-bars, and that five five-squares stacked atop one another make the cube of five (five, five times, taken five times). Symbolically, this looks like 5 X 5 X 5 or 5³. The beauty of the beaded material is that the child can count 25 beads in the five-square, and 125 beads in the five-cube; it is not an abstraction. It should be noted here that the child did no such work with numerical representation of the cubes when they worked with the Pink Tower at the EC level, but that work did give them a visual representation of what we get when we stack cubes that decrease in size by this ratio. When the Elementary child stacks the beaded cubes for the first time, they often remark, “Look! It's the Pink Tower!” One can say that the child sees a relationship and similarities between the Pink Tower and the beaded cubes, even though their understanding of the mathematics inherent in the latter, based on their work with the former, cannot be tracked.

In another example, we have seen that the EC child visually discriminates between differences in each cube's length, width, and height, leading to the claim that the Pink Tower work indirectly prepares the child for volume work in the Elementary classroom. Indeed, the Pink Tower is often present in the mathematics area of Elementary classrooms, where it can be used as a material for practicing the abstract formula for volume, or for calculating and comparing surface area from one cube to the next. It should be noted here that a good deal of work with concrete materials in the Elementary classroom precedes the abstract work of determining volume (which some children never arrive at in their Elementary years, or even later). While the older child may make an association between their early work with the Pink Tower and using it later for volume, whether or not this association facilitates their understanding of the mathematics involved is an open question.

Finally, the Pink Tower is also considered as indirect preparation for algebra, given the algebraic concepts related to the mathematical progression of one cube to the next. Placing one cube atop another in their construction of the Pink Tower does give the child a visual and haptic representation of the succession of cubes; however, we cannot demonstrate that they experience or understand the mathematical properties inherent in that progression. Again, while there is a connection between the mathematical principles inherent in the Pink Tower and algebraic concepts, it is difficult to evaluate the degree to which, if at all, this has impacted the older child's understanding of those concepts.

While we may not be able to track and measure the associations the child makes between their EC and Elementary work, the Pink Tower as an old friend has value in and reflects the spiral curriculum, one of the hallmarks of Montessori education. The child uses materials such as the Pink Tower on a sensorial level in the EC classroom, and again at the Elementary level as they explore abstract concepts such as surface area, volume, and algebraic progressions. In this example, the child revisits the Pink Tower in greater depth; that is, they extrapolate its mathematical principles as appropriate to their level of abstract understanding. This is but one example of how children in Montessori classrooms spiral back through basic concepts and major themes from all curriculum areas, from the EC level to secondary studies, each time delving deeper and cementing their understanding.

None of the caveats addressed in the preceding section diminish the inherent pedagogical value of the Pink Tower, which promotes skills in visual discrimination and grading by size, and indirectly introduces the decimal system, all aspects of the mathematical mind. Additionally, the child practices small-muscle control that they will use for writing and other fine-motor tasks. New vocabulary is introduced that will later be practiced through writing and reading tasks. Concentration and precision is practiced. And while we cannot measure the degree to which the child's sensorial exposure to the progression of cubes is recalled and/or activated when the mathematical principles of this progression are later introduced, the child may very well approach this new work with a sense of familiarity and affinity, like an “old friend,” and this may contribute to their future success in related areas of study.

Researcher Cathy Seeley, past-president of the National Council of Teachers of Mathematics, writes that “the development of algebraic thinking is a process, not an event. It is something that can be part of a positive, motivating, enriching school mathematics experience” (Seeley, 2004). We can reasonably assume Seeley would say the same of geometry and other areas of mathematics, and we know for certain that Montessori education provides the kind of mathematical experiences that she endorses. Whether we refer to it as indirect preparation or an old friend, the Pink Tower, like other materials in the EC classroom, represents part of a process, a step along the path to understanding concepts in mathematics and other areas, a journey of exploration, discovery, and learning.