The Mathematical Mind in the First Plane of Development: Montessori's Human Tendencies and Self-Construction 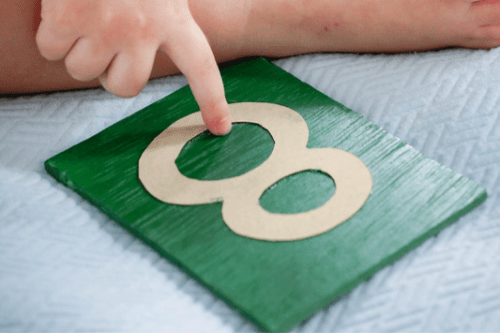 Children display a universal love of mathematics, which is par excellence the science of precision, order, and intelligence.
—Maria Montessori

Precision, order, and intelligence are the very ideas invoked by the term mathematical mind. Not coincidentally, these ideas reflect the human tendencies, as articulated not by Maria Montessori, but by her son, Mario Montessori. The human tendencies are defined as “innate, universal human traits … present and operative at birth … [and] throughout life … belonging to human beings by their very nature” (Sackett 2013, 2). The tendencies are addressed in a range of Maria Montessori's writings, directly or indirectly, and certainly in her treatment of mathematics, as evidenced in the opening quotation. We examine the human tendencies as constituents of the mathematical mind in a discussion of the following:

What is the Mathematical Mind?

The mathematical mind does not exist as a physical part of the human brain, but is rather “a concept, an abstraction, created by humans in an attempt to explain and label something we experience about [the] brain and the mind it supports.” And although our mind “works in ways that are mathematical,” we misunderstand “if we think the mathematical mind is just about mathematics” (Sackett 2014, 198-199). As we shall see, much of what is associated with the mathematical mind is innate behavior that humans tend toward from birth, or very shortly afterward, and it is vital for the child's self-construction.

Some two hundred years before Montessori's birth, the French mathematician, philosopher, and Catholic theologian, Blaise Pascal, wrote about the mind as being both mathematical and intuitive. Montessori borrowed Pascal's term, mathematical mind, using it in The Absorbent Mind, to describe “that part of the mind which is built up with exactitude,” specifically, order, abstraction-imagination, and exactness (Sackett 2014). We focus here on the role of order and exactness, plus concentration-repetition, in the mathematical mind during the first plane of development.

The Human Tendencies and the Mathematical Mind in the First Plane 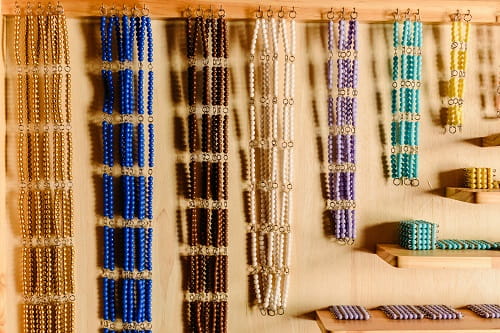 Montessori described the child in the first plane of development as endowed with an absorbent mind. “From birth through approximately age 6, the young child experiences a period of intense mental activity that allows her to ‘absorb’ learning from her environment quickly and easily without conscious effort.” While all the human tendencies are relevant here, we examine three—order, concentration-repetition, exactness-precision—in order to understand how, through working with the sensorial materials, the child absorbs and assimilates information as it directly and indirectly relates to mathematics.

Order – According to Montessori, humans have a tendency to recognize and appreciate order and organization in the various aspects of their existence, and this begins at birth. Children in the first plane explore a range of sensorial materials that essentially present the question, what things are alike and what things are different? The child investigates shapes and their corresponding insets; matches pictures and objects; explores dimensions in length, width, and height; grades objects by size and color; and identifies patterns—all basic principles of mathematics, absorbed by the child through their work with the materials. Because this work appeals to the child's innate sense of order (one of the characteristic sensitivities of the first plane child as well as a human tendency), the exercises are carried out with concentration and repetition.

Concentration and repetition – This tendency, which guides us toward achieving a goal, is exemplified by the child's use of the knobbed cylinders (although other materials could also serve as examples here). The material allows the child to practice one-to-one correspondence as they fit each cylinder into its matching socket. Four different sets provide varying dimensions of height and width, and as the child works through these, they incorporate concepts of dimensionality that they will use later in volume work. With trial and error driving their first efforts, the child repeats and persists in this task until, eventually, visual discrimination takes over and the exercise takes less and less time. Concentration allows the child to repeat the exercise until it is brought to successful completion; this sequence has been inspired by the tendency toward exactness, or precision.

Exactness-precision – The child's tendency toward exactness, or precision, is connected to their sense of accomplishment upon successfully completing a task. It “both inspires the activity and provides objective criteria for judging accomplishment” (Sackett 2013). The materials themselves provide feedback to the child through the control of error. If the child is not successful at replacing each of the pieces, the empty sockets and leftover cylinders will motivate them to try again, to do better, to be more precise. This trait usually manifests itself as logical, systematic thinking in the Elementary-age child. It should be noted that this tendency might not be evident in a child who is not developmentally ready for a given exercise, or who is easily frustrated for any number of possible reasons. Also, levels of attention will impact to what degree a child exhibits a sense of order and concentration.

Up to now, it may appear as if the first plane child, while working with the sensorial materials, is not actually doing math; however, during their manipulations, the child recognizes quantities, sequences, and patterns, and the mathematical mind has thus been engaged. Furthermore, the exploration (yet another tendency) of mathematical qualities inherent in the sensorial materials provides “a strong foundation for later [more formal] systematic study of arithmetic, geometry, and algebra.”

When the groundwork for basic mathematical principles has been laid, the child is introduced to the early materials for counting—the number rods and spindle boxes—and on to the golden bead material once they count and understand quantities up to ten. With the golden beads, the child is given a visual representation of quantities from 1 to 9999, practices symbol-quantity association, and eventually uses the material to perform the four operations. They are truly engaged in arithmetic now, and will continue in the Early Childhood and Elementary classrooms with a range of materials successively less concrete until they abstract, in their own time, the steps for solving dynamic problems (with regrouping and exchanging) on the four operations. Rounding out the math curriculum is work in fractions and decimals, measurement, geometry, and algebra.

The Mathematical Mind and the Child's Self-Construction

The preceding examples show that the mathematical mind is, clearly, concerned with mathematics, but the tendencies that drive it are also, for Montessori, very much about the child's self-construction:

We see here a natural path to formal mathematics being forged concurrent with the formation of an individual personality forged through meticulous observation and driven by interest. Spontaneous analysis leads to cognitive associations and to discovery of meaningful (and accurate) patterns out of concrete exploration and experience, all of which is driven by the “irresistible drive” of an individual personality (Sackett 2014, 212). 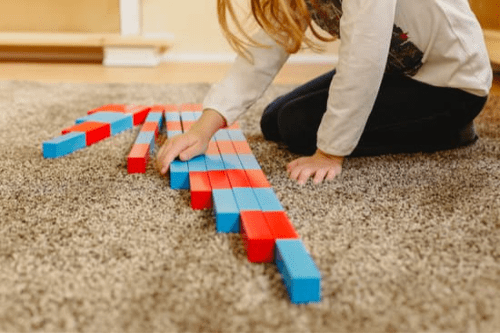 The tendencies that constitute the mathematical mind, then, are some of the very same humans use to navigate through life. Often, one tendency begets another, as seen in the following example. Orientation is the knowledge and experience we need to understand and feel secure in our environment. Once we are securely oriented, our physical and psychological needs met, we may be motivated to explore the unknown, to gain new knowledge and experiences. If we make new discoveries about the world, we may need to re-orient ourselves; we do so by classifying and categorizing our new knowledge, by putting order to our new experiences. (See “The Human Tendencies” for a complete list of the human tendencies and the interplay between them. Also of interest within this article is a suggested parallel between these tendencies and Abraham Maslow's hierarchy of needs.)

Haylock and Cockburn, in Understanding Mathematics for Young Children, also allude to the broader application of thinking mathematically, writing that it involves, “key cognitive processes by means of which learners organize and internalize the information they receive from the external world and construct meaning” (2000, 6).

The Mathematical Mind and Human Tendencies—Inherent and Universal?

There is extensive research among present-day scholars regarding the degree to which humans possess an innate mathematical predisposition. While the pertinent issues are debated, however, there is evidence that the newborn recognizes and prefers patterns (one aspect of mathematics) of dots that resemble the human face. A further study cites evidence that “infants are active in processing invariant information over changes,” that they look for regularities, suggesting that they are “oriented rather than disoriented, organized rather than disorganized” (Haylock & Cockburn 2000, 7).

This research gives some credibility to the innateness of human tendencies. “In their inclination to scrutinize novelty [and] look for ‘sameness’” (Gallagher 2011), we could say that the newborn is fulfilling their tendency toward orientation, “the tendency to familiarize myself with my surroundings, my situation, my environment” (Sackett 2013). Additional research suggests that this is the child engaging in two important processes also used for understanding math—equivalence and transformation. “These two fundamental processes are what children engage in when they recognize what is the same about a number of mathematical objects (equivalence) and what is different or what has changed (transformation)” (Haylock & Cockburn 2000, 8). This circles back to the tendency toward order, to asking, “What is the same and what is different?”

We know that non-human animals also notice and react to changes in their environment and orient themselves accordingly. Other species also explore, move, and communicate, and self-preservation is instinctual to most organisms, animals and otherwise. So while these tendencies and others do describe human behavior, it is important to note that they are not exclusive to humans, which the term human tendencies could imply. Additionally, research has shown that numeracy too is not unique to humans. A rudimentary system of counting has been demonstrated not only in non-human primates, but in other mammals (dogs, horses, rats, mice); birds (ravens, parrots, pigeons); fish (guppies, green swordtails, mosquitofish); and even invertebrates (ants). While we would not refer to this as a mathematical mind in the same sense that we ascribe it to humans, we would be remiss in omitting this important and relevant information. 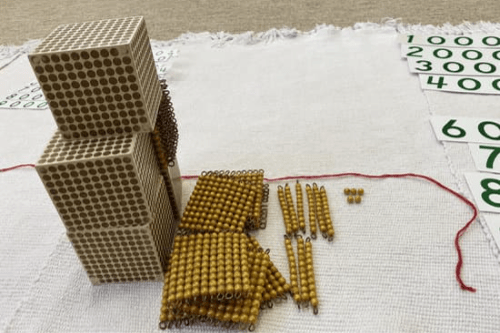 Although some of the observations made in this article may be dated given new findings in psychophysics (sensation and perception and comparative cognition), there is heuristic and pedagogical value in revisiting these ideas. It is an open and empirical question regarding the degree to which humans are born with a propensity for mathematical thinking; and many of the tendencies qualified as human in the Montessori literature are clearly not uniquely human. Additionally, while Montessori teachers “offer the means for the child’s own self-directed activity,” to suggest that the child's work is “nature's plan” (Sackett 2014, 214) brings up the question of teleology.

What we can say, for certain, is that in a Montessori classroom environment where materials are designed for the development of specific skills and habits, the tendencies associated with the mathematical mind are encouraged, practiced, and brought to fruition as the child works toward and reaches goals. And whether this work is part of the child's plan, or part of the educational plan, or both, the child is learning, growing, and becoming through work befitting their nature and appropriate to their development, and this makes all the difference.