For the better part of 1915, the ingenuity of the new century was on spectacular display at the Panama Pacific International Exposition in San Francisco. An actual Ford assembly line turned out Model Ts in 10 minutes flat. The brand new transcontinental telephone system connected callers 3,000 miles apart. And, for 4 months of the fair’s run, 30 young children attended school in a glass-walled Montessori classroom, providing an intimate view of the new educational model that was quickly catching on among American educators and parents.

The “Glass Classroom” was tucked inside the Palace of Education and Social Economy, 1 of 11 massive exhibit palaces in the sprawling, 635-acre fair. Three of the room’s walls had extensive windows, inviting visitors to watch the goings-on inside.

The students had an equally good view of the spectators, but they diligently attended to their work, giving rise to admiring reports about their powers of concentration. The children ranged in age from 2 ½ to 6 and had been chosen from a pool of several thousand applicants. At Dr. Maria Montessori’s insistence, only children without prior experience at school were eligible for the class.

Dr. Montessori’s influence could be seen throughout the model classroom. She recognized the immense publicity value of the well-attended fair and was anxious for everything to be perfect. Billowing fabric provided a ceiling for the space, giving the room a cozy feel. The blue, gray, and white furnishings were built by designer Louise Brigham, renowned for her “box furniture”—simple, recycled materials crafted into beautiful pieces for the home.

The room was filled with objects of various shapes, sizes, and colors, intentionally arranged on low shelves to invite activity and exploration. These learning materials encouraged the children to solve problems independently, feel self-confident, think analytically, and experience the satisfaction that comes from accomplishment.

The job of lead teacher—who Dr. Montessori claimed should be a guide, rather than an authority figure—fell to Helen Parkhurst, Dr. Montessori’s star pupil and a renowned American educator in her own right. Parkhurst later founded the progressive Dalton School in New York City and developed the acclaimed Dalton Laboratory Plan for secondary education, both inspired by Montessori philosophy and practice.

If embodying Montessori education for the world’s visitors was a daunting assignment, as Parkhurst later admitted, there’s no doubt that she aced it.

The demonstration classroom was hugely popular with fairgoers, according to historical accounts, with many visitors returning day after day to watch the industrious “miracle children” in their beautiful classroom setting. The school day ran from 9 AM – noon, and as lunchtime approached, the crowds grew. Observers filled the rows of seats and beyond, transfixed by the classroom’s elegant dining table set with linens, china, and candles; the display of impeccable table manners; and the sight of young children serving themselves and cleaning up afterward.

As a result of the Glass Classroom, and favorable stories in American newspapers and magazines, the American public and educational leaders of the period embraced both the Montessori pedagogy and the woman who had created it.

It was an exciting time for the Montessori movement. However, subsequent world events and personal events in Dr. Montessori’s life led to decline of the educational approach in the United States over the next several decades. By the 1960s, with new leaders and the creation of AMS, Montessori saw resurgence in the U.S. that continues today. 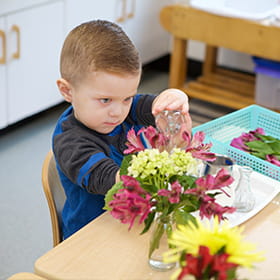 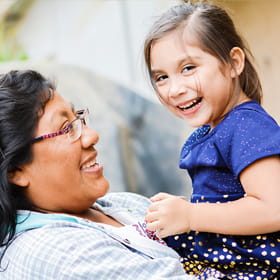