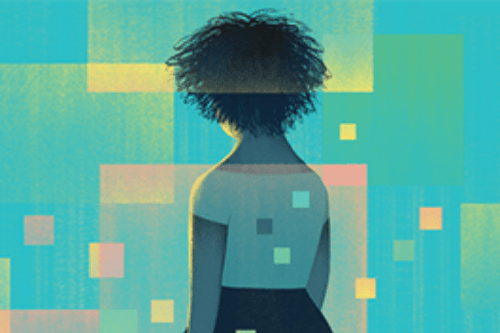 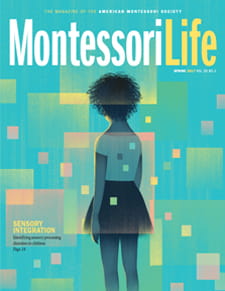 This article was featured in our 2017 Spring edition of Montessori Life magazine. Read full issues online (AMS members only).

AMS members also receive a print subscription to Montessori Life magazine. Become a member today to receive your own subscription plus access to the complete digital archives.

[Editors’ note: This is the first in a series of articles examining the role of sensory integration in early childhood. Stay tuned to the Montessori Life Blog for part 2 and part 3 after this article.]

In 21st-century America, every public school system has the ability to identify, assess, and diagnose special needs in young children, as well as provide early intervention programs to support those needs. It would seem that we—educators and parents—should have this routine down. My child isn’t thriving: I consult my pediatrician, seek input from my early learning teachers and caregivers, have my child assessed by the proper professionals in partnership with home, school, and clinical environments, identify the problem, and get help. Simple? No. Ten years after I first wrote in Montessori Life about the challenges of identifying, diagnosing, and treating sensory processing disorder (SPD) in young children [“Making Sense of Every Child,” Volume 18, Number 4, 2006], many of the same difficulties remain. The good news is that more people know about sensory integration (SI) and SPD than ever before.

The bad news? Little has been done to integrate the information we have learned into most children’s early lives. During this decade, most American schools have become less sensory friendly. Opportunities for outdoor time and active play have dramatically decreased, both at home and school. Children spend more time in front of screens and less time experiencing the world through a variety of senses. More children are being diagnosed with a range of disorders and often placed on medications that may or may not help. As high-stakes testing has become firmly ingrained, children are allowed to move less and personalize their learning experiences less, though we know that developmentally they need both of those more. Though Montessorians counter this trend, we must use our voices to make developmentally appropriate, sensory supportive learning environments available to every child, not just those in our classrooms. To do so, we must have a common understanding of the issue at hand. In this article, I will define some terminology related to sensory integration.

Humans think of themselves as having five senses: vision, hearing, taste, smell, and touch. In reality, we have two more: vestibular and proprioceptive. In addition, what we normally reference as “touch” is actually the whole body tactile sense, in which our skin is continually taking in information from our environment. All of these senses play a role in sensory integration. Our conventionally defined senses are called the “far” senses, responding to stimuli from outside our bodies; the additional senses are called “near” senses, because they respond to internal stimuli that we can’t shut out or consciously control (Kranowitz, 1998). Though touch is traditionally grouped with the far senses, from an SI perspective it is more often linked with the near senses and referred to as the tactile sense, giving us a working total of seven senses (Smith & Gouze, 2004). Let’s take a closer look at the near senses, with which you may not be as familiar.

The vestibular sense is focused on body position and movement in space: specifically feelings of balance and movement. Each of us responds to vestibular stimulation in different ways—and some of us don’t like it. Do you crave fast or spinning motions, or do you get carsick just by riding in the back seat? Typical vestibular processing varies widely, and how we each process such sensation falls somewhere on that spectrum.

The proprioceptive sense processes information caused by contraction or stretching of muscles and by bending, straightening, pulling, or compressing joints between bones, including joint position and motor planning. Think of how you feel when you stretch in a yoga class or hang by both arms from a high bar: These types of movements help to universally refocus attention even as they refresh and relax us. But when the proprioceptive sense isn’t working effectively, often the vestibular and tactile senses are affected as well.

As with the near senses, all of us fall on a spectrum for each of the far senses. You may be very sensitive to auditory input, being bothered by low, distant sounds that others do not notice, while at the same time not paying attention to the visual input provided by a heavily decorated classroom. Or the smell of a particular type of fish could make you gag even as you don’t mind tight turtleneck sweaters. We all have different sensory profiles. The key is that by the time we reach adulthood, most of us have learned to accommodate for those little quirks that make us unique.

THE SENSES AWAKEN AND REFINE

Sensory integration is defined as a neurobiological activity within our bodies in which the nervous system processes information from the senses and organizes stimuli (Ayres, 1979). This is no small task: More than 80% of the nervous system is involved in processing or coordination of sensory input (Cantu, 2002). The result of this process is an organized brain, which forms our perceptions, behavior, and learning.

When a child is first born, he is bombarded with impressions. Whereas in utero his senses were muted, now they receive input 24 hours a day, with varying degrees of urgency. How does one learn to filter all of that information, noting only pieces that pose a threat or serve some other larger purpose? This process occurs via a predictable, sequential progression in our sensory systems over our first 6 to 8 years of life. That means that by the time a child enters early elementary school, his senses are effectively integrated, allowing him to learn, attend, and self-regulate in school and other environments (Kranowitz, 1998).

But what about the child who can’t effectively regulate all of this sensory input? That is where some clarifying vocabulary becomes helpful. Someone who feels sensory input too keenly is described as hypersensitive in a sense; a person who doesn’t as effectively receive or process sensory stimulation is called hyposensitive in that sense.

For the child with hypersensitivity, a normal environment can create a barrage of extra connections firing in her central nervous system, resulting in overstimulation. In general, she may respond in one of two ways: avoid the situation causing the overstimulation or respond negatively by acting out. Routine can be a top priority for this child, because in a routine activity, she knows how to predict and respond to what is happening.

The child with hyposensitivity will likely look quite different, as his brain is registering sensation less intensely than normal. His behaviors may be referred to as “high energy” or “hyperactive,” because he needs extra stimulation just to be able to maintain an ordinary level of arousal, alertness, or focus. In a word, he is understimulated. Typically, he remedies this by seeking out or creating extra stimulation.

STATUS OF SPD RESEARCH AND ACCEPTANCE

The term sensory integration was originally defined in the 1950s and 1960s by occupational therapist (OT) Jean Ayres (Kranowitz, 1998), and the OT community has remained the hub for research, diagnosis, and treatment of SPD. For American children with educational challenges, the Diagnostic and Statistical Manual of Mental Disorders, Fifth Edition (or DSM-5) (American Psychiatric Association, 2013), is critically important because inclusion of a disorder in the DSM-5 allows for treatment and support to be paid for by the child’s public school district if it interferes with his or her educational achievement. Knowing the expense of SPD treatment and the importance of early intervention, the OT community has conducted a wide variety of clinical research since 2000, with the goal of having SPD included in the DSM-5. Unfortunately, when DSM-5 was published in 2013, SPD was not included, on the argument that it is not a stand-alone, uniquely diagnosable disorder for the purposes of educational evaluation. SPD has been included in other diagnostic manuals, including the Diagnostic Classification of Mental Health and Developmental Disorders of Infancy and Early Childhood (Zero to Three, 2005), the Diagnostic Manual for Infancy and Early Childhood (Interdisciplinary Council on Developmental and Learning Disorders, 2012), and the Psychodynamic Diagnostic Manual (Psychodynamic Task Force, 2006). Occupational therapists continue to work to build bridges with other diagnostic bodies, including the medical community, to make SPD more universally recognized. However, it is clear from statements such as one from the American Academy of Pediatrics (2012), in which the organization recommends against a standalone diagnosis of SPD, that there is still considerable distance to go to meet this goal.

Even so, research conducted over the past 15 years related to SPD has yielded many dividends in our understanding of how SPD relates to and often co-exists with other disorders. For example:

The crossover between SPD and other disorders is by no means limited to the above examples. Other literature examines connections with disorders ranging from fragile X syndrome, mood disorders, behavioral disorders, and nonverbal learning disabilities (NVLD) to physically based conditions, such as premature birth, prenatal drug exposure, cerebral palsy/spina bifida/ Down syndrome, language delay, and other learning disabilities, as well as environmentally caused deficits, including abuse, neglect, or trauma. In addition, children with SPD frequently find challenges in engaging effectively with their peers at a social level, whether during play or in more structured environments like team sports, and also suffer other performance issues in daily life (Cosbey, Johnston, & Dunn, 2010; Koenig & Rudney, 2010; Reynolds & Lane, 2008).

As so many American children spend most of their waking hours in learning environments that are neither developmentally appropriate nor conducive to healthy maturation in sensory, socio-emotional, physical, or intellectual contexts, we must continue to spread the word about the long-term ramifications of these choices. In my next article, I will consider environmental interventions to support sensory integration, both for typically developing children and those with sensory challenges. I will then examine the roles of occupational therapists and other clinical professionals in supporting children with diagnosed sensory issues, as well as steps they feel educators should take to make our educational settings more sensory friendly.

American Academy of Pediatrics. (2012, May). Sensory integration therapies for children with developmental and behavioral disorders. Pediatrics, 129(6), 1186–1189.

Baranek, G. T. (2002, October). Efficacy of sensory and motor interventions for children with autism. Journal of Autism and Developmental Disorders, 32(5), 397–422.